Update 11/14/2015: This has been converted into a jQuery plugin so the code below may be different from the demo files. For more information on how to use the plugin, read the first section in the previous tutorial.

In our previous tutorial, we learned how to create a photo gallery with Bootstrap. Our gallery looks nice and pretty, regardless of screen size. When an image is clicked, a modal box appears with a larger version of the image. If you haven’t done so, you might want to “Explore Bootstrap’s Grid System” first before getting your hands dirty.
View Demo
View in Github
Now we’re going to add some control buttons right below the large image, so you can navigate through the gallery right in the modal window. Take a look at what we’re building in the image below.

I know that there are plenty of plugins that do this sort of thing. But I like doing things from scratch just to learn how things work. Ready to get started – let’s begin.

We’re going to have to add our markup via Javascript. This is because the contents of our modal box doesn’t really exist yet when the page loads. In our last tutorial, we’re already have a click event where we’re building our large image. We simply need to append to this code. See below (in between where it says “Start of new code” and “End of new code”).

Explanation: – this click event is inside the small image that was clicked. We just need to know which index it is from the list of images we have. We can achieve this by using jQuery’s .index() method. So we wrote:

Meaning, we want the image that was clicked, traversing to it’s parent (list item) and grabbing it’s index. Then assigning it to a variable “index”. Note that our index is array based – so the first element is a zero.
Next, we create the actual markup that we’re adding right in the modal box. You see we start with our image, then our div containing our next and previous links. You see how we consume the variable “index” that we created previously:

Notice that our “Next” button has a “+2” for it’s “href” attribute. That’s because we want a number that is ahead of the current image that is showing, plus another because we started with zero – remember? Try out the new code by clicking on an image. As soon as our modal window pops up, you see our new previous and next buttons in place. But don’t click them yet – we haven’t written that part. 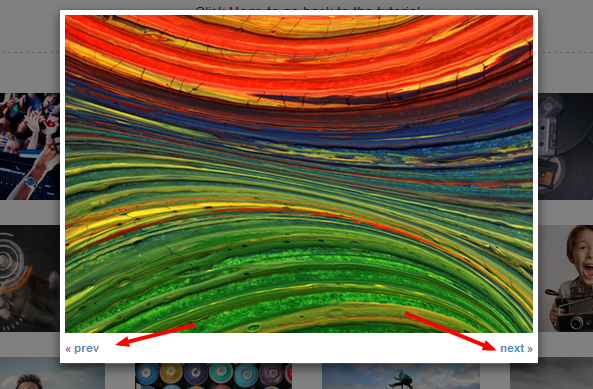 Create the logic when the buttons are clicked

Now let’s take care of what happens when our buttons are clicked. Let’s think about what we need to achieve for a minute. First, we need to change the image “src” attribute of our large image to the next (or previous) image in the list. We already have our index so that shouldn’t be too hard. We also need to increment (or decrement) our index each time we click. Oh, we also have to hide the next button – once we get to the last image. The same behavior needs to happen to the previous button when we hit the first image. Add the code below right outside our document ready handler:

This just sets up our click handler for both previous and next buttons. Note that we have “.control” as a class to both links – so we only have to code once. Notice that we’re also binding the click event of our link to a parent element (in this case the document). This binding technique is used because our link is not present yet even when document is ready (reason why we wrote it outside of the .ready()).
Replace the current image
Now let’s add this code inside our click handler:

Explanation: – first, we set up a variable called “index” (not the same as the index that we created previously as this is local to the anonymous function it’s in). This variable contains the number that is in the “href” of the link clicked. Variable “src” goes back to our un-ordered list, grabs the “nth-child” with the index as the number, grabs the image inside it and takes the “src” attribute.
Finally, it assigns the “src” value and replaces the current image with it. Increment or Decrement the Link Counters At the same time, whenever our links are clicked, we’d want to change it’s “href” value. Add the code below:

Explanation: – Again, we create 2 new variables: “newPrevIndex” – which as a less than one value of the current index, and “newNextIndex” which has plus two. We then create an “if else” block. We check if the link clicked by checking it’s class, then we change both buttons “href” attributes accordingly.
Hide links when last or first image is reached
Now we need to hide the “next” link when we reach the last image in the list and hide the “previous” when the first image is reached. We also need to re-show them when we go the opposite direction. Add the code below:

Explanation: – this part is pretty simple. It simply takes the total number of list items in our gallery (var total), and makes that the basis of our comparisons. You will see the first “if” block checking if the total is the same as the new index. If it is, simply hide the “next” button, if not – show the link again. The next “if” block checks if our previous index is “0” (which is our first item), then hides and shows our “previous” link.
What about if the last item IS clicked? Okay, the above code handles when the links are clicked – but what if the last OR the first item is clicked so the modal window has the first or last item. This will still have BOTH buttons in view right? In this case, we simply need to “trigger” the same click handler we just wrote above. We do this by adding the code below – right when we create the html in our modal window:

Finally, adding some styles to our links so it looks better. Note that I didn’t really spend a lot of time styling the links because this is pretty much open to your liking. Instead, I just wrote a couple of lines to make the links presentable:

So now let’s see what we have: 1) a fully responsive photo gallery (Bootstrap powered), 2) a modal pop up when a thumbnail is clicked and 3) control buttons that navigate through the images once clicked. And we wrote all of this without a plugin! How cool is that! If you haven’t seen the demo, feel free to check it out here.